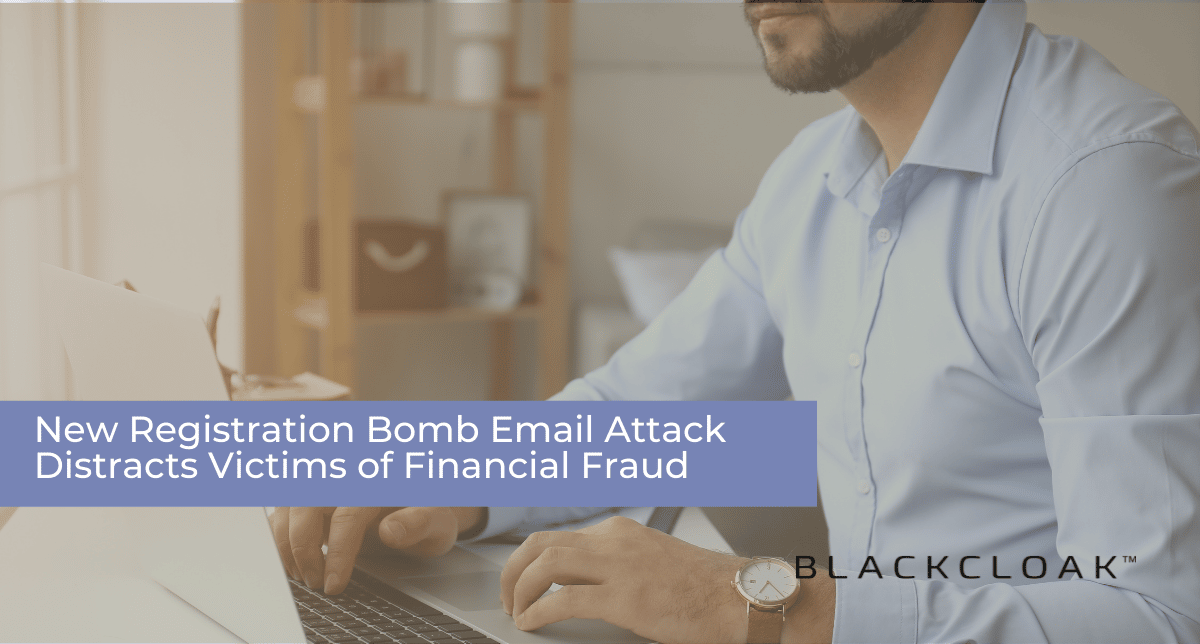 Email bombing attacks, in which bots flood an email address or server with hundreds to thousands of email messages, have been a significant thorn in the sides of CISOs and ordinary email users since the late 2000s. This nefarious act, which can achieve a similar outcome to that of a distributed denial of service (DDoS) attack, is also frequently deployed to distract and hide important emails.

One of the most notable email bombing campaigns came in 2016 when, according to Brian Krebs, “unknown assailants launched a massive cyber attack aimed at flooding targeted dot-gov (.gov) email inboxes with subscription requests to thousands of email lists.” The email server was so overwhelmed that many .gov email addresses remained unusable for days.

Overview: Over the past six months, BlackCloak analysts discovered a growing number of new and existing clients’ whose inboxes were overwhelmed with registration confirmation emails from websites that they had never visited and had no affiliation with. Our investigation quickly revealed that these ‘registration bombs’ – the term we designated to differentiate these attacks from traditional email bombs – were being deployed to distract victims from recognizing that their Walmart.com account had been hacked and that financial fraud had occurred. Inbox example of registration bomb courtesy of Krebs on Security

What happened: Our research found that attackers obtained an unknown number of Walmart.com login credentials that were leaked onto the Dark Web, often from unrelated website data breaches. With usernames and passwords at their disposal, attackers were able to reuse these stolen credentials to log into active Walmart.com accounts, and make purchases using the valid credit card that remained on file. We quickly recognized that the majority of transactions were $250 or less. This is likely intentional so as to avoid triggering fraud alerts . Here’s where the ‘registration bombing’ attack comes in: to distract from the financial fraud, the attackers would overload the victims’ inbox with said registration emails, thereby pushing the Walmart.com purchase confirmation email completely out of sight. Astoundingly, some victims received more than 500 registration emails, pushing down the purchase receipt 5, 7 and even 10 pages deep. For many, the financial fraud went unnoticed for a long period of time. What to do: It is unknown how many Walmart.com customers have been impacted by this ‘registration bombing’ campaign. What is clear however is that this is a concerted attempt by attackers to cover up the account compromise and financial fraud by drowning victims in email after email. Being that Walmart.com has suffered several data breaches in the past several years, it’s wise for all patrons to update their password immediately. The best passwords are at least 12 characters in length, randomly generated and are not used on any other website. In addition, Walmart.com shoppers should enable two-factor authentication and check their credit card statements for the past 6 months, reporting any anomalous activity to both the retailer and the credit card company.

It is easy to understand why ‘registration bombing’ is a successful tactic and a reasonable evolution of the email bomb. It’s easy to deploy and time-consuming to resolve. Moving forward, everyone should be extra cognizant of unsolicited emails, especially those in mass quantity that are requesting an action be taken.

BlackCloak members who think they might have been impacted by the Walmart.com ‘registration bombing’ attack, or suspect an email bombing attack in the future should contact the Concierge Support Team immediately for investigation, analysis and the appropriate response. And of course, don’t forget to deploy multi-factor authentication on Walmart.com and on any other e-commerce accounts that offer it. With over 20 years experience protecting FinTech companies, Daniel has developed and delivered cybersecurity solutions to market for both growing startups and highly-regulated financial sector companies alike.

In his current role as CISO for the leader in digital executive protection, Daniel is responsible for oversight of the organization’s Client Security Operations Center (SOC) and threat intelligence platform, as well as its penetration testing and digital forensics teams.

Specifically, Daniel leads the daily SOC operations by empowering a team of cybersecurity analysts, penetration testers and threat intelligence experts to monitor, prevent, detect, and respond to both suspicious activity and confirmed cyberattacks of potential consequence to BlackCloak clients.

Daniel is also heavily involved in product vision and ideation, working closely with the engineering and client service teams to enhance the security features and user experience of BlackCloak’s Concierge Privacy & Cybersecurity PlatformTM.

Prior to BlackCloak, Daniel served for almost 20 years in various roles, including vice president, cybersecurity director and CISO at LSQ, a global leader in working capital finance and payment solutions. During his tenure, Daniel also worked as director of information security at Viewpost, an electronic payments company for enterprises, which was spun out of LSQ. During his time with Viewpost, Danny helped secure a CSO50 – Top 50 Security Innovations Award and placed second at DEFCON 24 CMD+CTRL CTF.

Daniel holds a B.S. in Information Technology from Western Governors University. He also maintains several cybersecurity industry certifications, including Offensive Security Certified Professional (OSCP) and GIAC Certified Forensic Analysts (GCFA). Daniel is also a Microsoft Certified Systems Engineer (MCSE) and a member of InfraGard, a partnership between the Federal Bureau of Investigation (FBI) and members of the private sector for the protection of U.S. Critical Infrastructure.